Hello. I have been using this blog since May 2011 and it’s great to have all the posts since then as an archive of what has been going on, in terms of behind the scenes thinking, in relation to what we are doing publicly at Wysing. I will still be blogging but from now on all blog posts will appear on the main Wysing website only. That can be found HERE. I have also linked those posts to Wysing Facebook page and Twitter account. There isn’t currently an option to subscribe to the blog in its new location, but you could subscribe to our e-bulletins, our Facebook page or our Twitter account where notifications of new blog posts will be made. Thank you to all the people who subscribed to this blog and see you over on the Wysing website. Donna 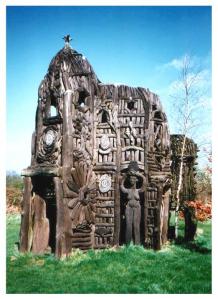 Marshall Allen was very taken with our Tree Keep last night, especially as the skies were so clear and starry. It was built by outsider artist Ben Wilson in the early 1990s when this photo was taken. It’s still just about standing though that sapling is now a huge tree.

I dragged my family all the way to Derry yesterday to experience the UK’s first City of Culture, an opportunity it won over other great cities – Birmingham, Sheffield and Norwich. I hasten to add that I didn’t drag them all the way from Cambridge where I now live but from another part of Northern Ireland where most of my family live. Except that other exile, my much adored only sister who now lives in the US. I chose yesterday – 4 April – in fact because she left us that morning to return westward and I thought it might distract us from that fact. And because the homepage of a gallery I wanted to visit said that its new exhibition was open from 4 April. It wasn’t, at least not until 6pm that evening when we would be gone again. In fact, nothing seemed to be open. Not even the city’s beautiful Guildhall which was not only shut, but totally behind fencing. There wasn’t a mention of the City of Culture in either the train or bus stations. The Tourist Information signage in the city centre didn’t mention it either. Or have any maps of cultural highlights – we had to Google from our phones to find addresses of places. There wasn’t even the shop HQ place they had two years ago when I last visited and when the city was bidding from City of Culture status. Maybe it had moved somewhere else and we just couldn’t find it. The only evidence of it all was one of those awful outdoor screens which seemed to be broadcasting the TV, and a few flags. What’s going on? Derry is one of the most important cities in Ireland. It encapsulates the whole of Irish history in one historic centre – a walled city that was established in the 6th century and has seen centuries of rebellion from the 17th century right up until the recent Troubles and the civil rights movement. It really has the most complex and important political and cultural history and identity. Maybe it’s all still waiting to happen – the Turner Prize and other home grown cultural events arrive and emerge later in the year. But there’s not much going on at the moment. Even though it’s the school holidays. Maybe it’ s supposed to be low key and quiet. Oh well. It’s still the friendliest city I know and the train journey there is through some of the most stunning scenery you are ever likely to see. And the banks of the Lough Foyle estuary were literally teeming with wading birds of all kinds – avocets, oyster catchers, sandpipers, geese, whooper swans. Beautiful.

Found in shingly gravel. 3cms long. Very heavy. Attracts a magnet. How to tell if its a piece of meteorite, or just a lump of metal? 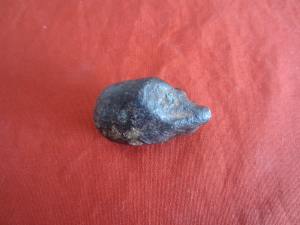 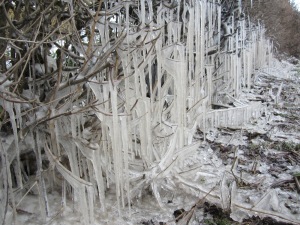 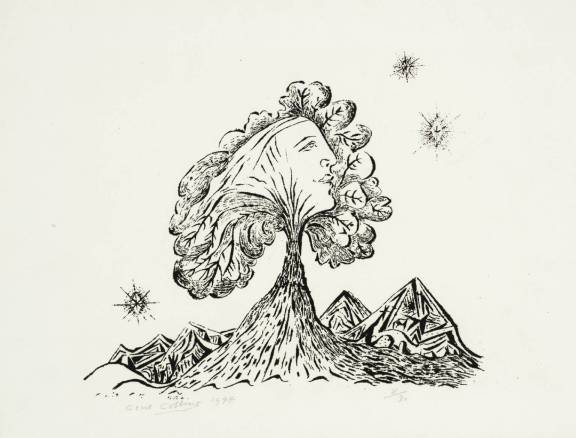 Yesterday, Lotte, Gareth and I did studio visits with artists who will be coming to Wysing on residencies next month – Anna Barham, David Osbaldeston and Florian Roithmayr.  Gareth will be visiting the fourth artist – Charlotte Prodger – over the weekend whilst he’s in Glasgow – he’s speaking at a conference on supporting artists at Tramway on Saturday of you are in that part of the world, more info here. We usually do these advance visits before artists come on residencies because when we select artists for the residency programme we don’t interview them at the time and make the selection based on their proposal for what they would do during a residency, and on their work. It’s good to visit though to get a better sense about ideas and talk through logisitics. Even though we are only an hour and a half from London, it takes a while to adjust to our rural location which is why we have increased residencies this year for six to eight weeks. It was great to meet them, though we already know Florian very well as he took part in a retreat last year and has shown in our gallery, and talk through ideas. Anna talked about some research she’s doing on Text World Theory which is completely fascinating. Joanna Gavins, a lecturer in literary linguistics at Sheffield University is leading research into this theory which, if I understood it correctly, starts from the assumption that any piece of spoken or written text instantly becomes a mental representation, a form of ‘object’, in the mind of the receiver and in doing so becomes real. Joanna Gavins will be in conversation with Anna at Site Gallery in Sheffield on 21 March talking about the Theory which I’m aiming to try and get along. It would be good to do a residency trip and both David and Florian were also talking about text and spoken text, and how to realise their ongoing research through the voice. Getting excited about exploring all of this in the coming months. Got back from London last night just in time to make it to Kettle’s Yard for the opening of Outpost’s show there and what a great show it is – some really wonderful work, including ceramics by Lucy Conochie that were made at Wysing. It’s a really interesting show and  it was great to see the Norwich contingent in Cambridge for the evening.

It was wonderful to have many Directors and Curators from across the UK at Wysing for the annual Plus Tate residential which was focussed on embedding artistic research into public programming. I really enjoyed hearing from Annie Fletcher, Curator at Van Abbemuseum. What they are doing at there is seriously inspiring – making visible the focus of their curatorial discourse in engaging and inspiring programming. It was great to hear too from colleagues from the Banff Centre and Townhouse, Cairo. Learnt a lot, as ever, and really loved The Grantchester Pottery‘s transformation of our Window Room. If you ever get the chance to work with Giles Round – grab it. The man is a generous and  genial genius. 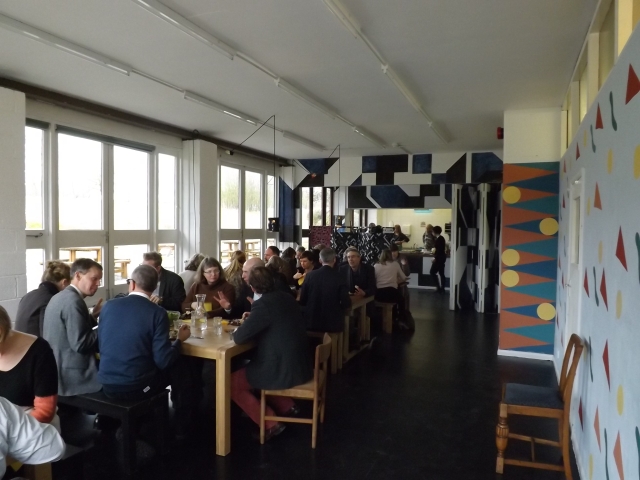 Thanks to Philomene Pirecki for sending this page from Camus’ The Myth of Sisyphus where he references Artistotle’s  writings on the truth paradox. This is exactly what Alfred Tarski was aiming to address, and which led to the creation of his T sentences – A and B is true if and only if A and B is true, etc. All starting points for our forthcoming residencies which, in case you don’t already know, includes some fantastic artists who will be living and working at Wysing over the next year – Anna Barham, James Beckett, Michael Dean, Cécile B Evans, David Osbaldeston, Seb Patane, Charlotte Prodger and Florian Roithmayr. 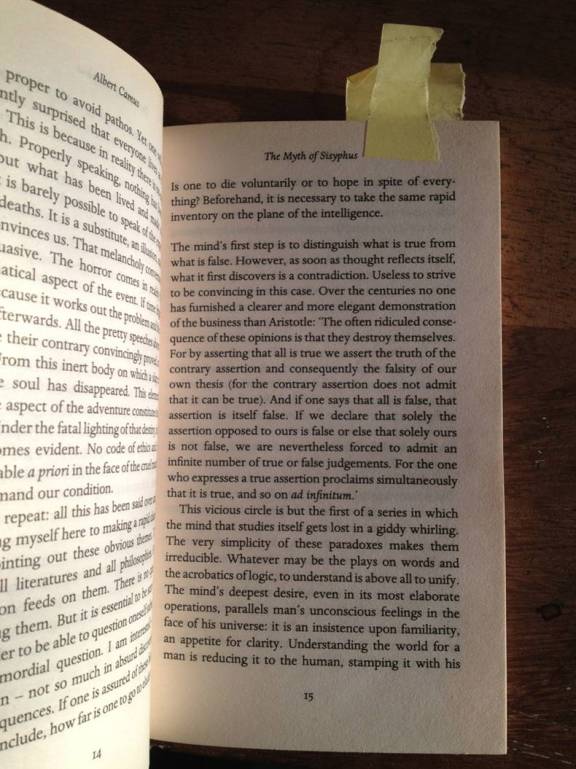 I’ve just finished reading I Love Dick by the American artist and writer Chris Kraus. It’s a book that fearlessly exposes a period of crises in her life when she faces up to her limitations as an artist, marriage problems and her impending middle age. She does this in a very particular way – by spending four intense days obsessively writing letters to someone – Dick – she meets at a dinner party. Her husband, a successful academic, joins her in the letter writing, intensifying the feelings and providing the driving force behind all that occurs later in the book. What they do then, extraordinarily, is give the object of her obsession all the letters – 80 pages of them, followed by another 40 pages – proposing that they make a joint art work. The act is initially met with bemused silence. The letters, interspersed with contextualising texts, cover heightened emotion, personal histories, self analysis, mental illness, philosophy, art theory and criticism, and make reference to artists working in the US at that time, the 1990s, from Kathy Acker to Mike Kelley. During the period the book recounts Chris Kraus was in contact with some of the most exciting and interesting artists, writers and thinkers working in the US at the time and the second half of the book is composed mostly of factual texts noting where Chris is at the time; New York, LA, various parties and exhibition openings, and some art criticism. What I found so interesting about this book is not only that Chris Kraus was willing to embrace an exposing and humiliating loss of dignity, but that she deliberately generated a period of emotional intensity as way to move her work as an artist forward. It started me thinking about intense circles of artists – at times Chris Kraus’ letters reminded me of Dora Carrington’s pleading letters to Lytton Strachey – and like the Bloomsbury group, how these artistic circles support and enable those within them to enter into an emotional intensity, which in turns enables them to make their best work – a heightened period of working, often at a high personal cost to those involved. I Love Dick is an important work of feminist writing, but is also extraordinary artistic achievement.